Updated 4/26/2011.
Added new webpage on Dobsonville as well as additions to the Mills on the Tankerhoosen River page

For 120 years, a railroad brought goods and passengers to and through Vernon and Rockville. Once a bustling railroad corridor, the trains and rails have long since left town. The last freight train passed through town in late 1970, the last regular passenger train, 1955. The rails were removed in the mid 1970's, but the roadbed remains. Today, the old railroad routes are part of Vernon's Rails to Trails linear park.

The Vernon Depot passenger station was located on the narrow strip of land that is bordered by Church Street, Phoenix Street, Birch Road and Washington Street. Today, nature has reclaimed the area, but there are still reminders of the past. Not far from the Church Street parking area, the stone block turntable pit remains that once turned around the locomotives running to and from Rockville. A short distance from there, the footings for the water tower poke out of the ground. Next to the visitors shelter, the footprint of the passenger station has recently been cleared and defined with a wooden outline as part of a historical project (more on that here) . Near there, a telegraph pole about seven feet high sticks out of the ground. It had at one time supported two wood boxes that that housed communication devices.

Continuing towards Washington Street, the footprint of the freighthouse has also been defined as part of the project previously mentioned project. Just west of Washington Street is the foundation of the signal tower. Here, the double track from East Hartford expanded into four tracks where it crossed Washington Street. Up at the Phoenix Street end, the steel bridge beam that once carried the line through to Willimantic and ultimately to Providence, RI, rests upside down on the ground. It was removed and the stone bridge abutments were dismantled when the Rail Trail was developed in the mid 1990's.

I've developed this website for two reasons. The first is to share the research I've done and the pictures I have of the Vernon Depot area, and of the railroad history in Vernon, Connecticut. I consider this to be a work in progress, and I will add to it as more material comes along. Secondly, and more importantly, to seek information and/or pictures from those who might have more first hand knowledge of this location in railroad history. Any photographs or information on the railroad history in Vernon is of great interest to me. I am also interested the village around Vernon Depot, a.k.a. Dobsonville. If you have any images, information, corrections or comments that you would like to add to this effort, please email me at admin@vernondepot.com.

I'm also interested in the old Mills on the Tankerhoosen River in Vernon, and also have a website linked from here as well on that topic. While I have carefully researched the topics in this website, I do not claim to be an authority on railroad history, nor Vernon's local history. This website should not be considered the last word on either.

Many of the photographs I have presented on this website were acquired through the Vernon Historical Society and the Railroad History Archive at the Thomas J. Dodd Research Center, University of Connecticut. Others are pictures and postcards from my personal collection. I describe the locations of the photographs to the best of my ability. Below is a map the Vernon Depot area to get us oriented. I also provide GPS Coordinates for some locations. These coordinates are based in the WGS 84 (NAD 83) coordinate datum. 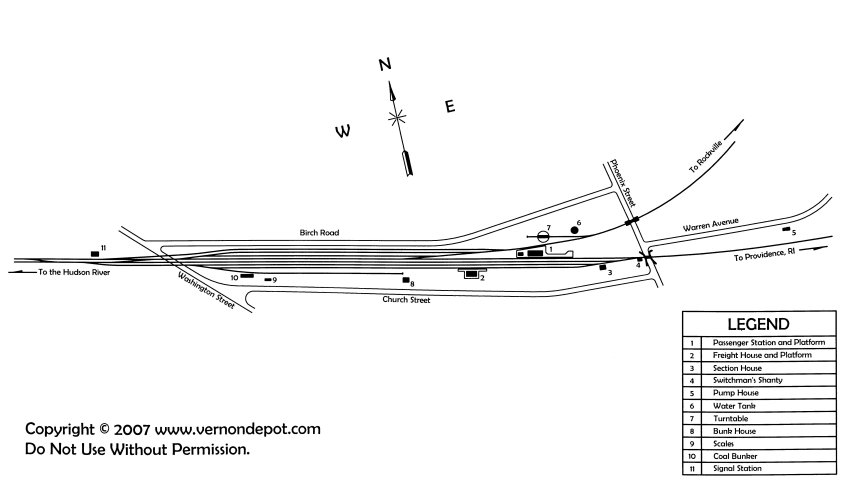 This map is of my creation based on 1915 valuation maps showing track and railroad structures in the Vernon Depot area. Click here or on the map to view a larger copy.

Click here to see all the pictures I have posted, or read on for a historical overview.

In 1833, the Manchester Railroad Company was chartered to build a railroad between Hartford and Bolton Notch via Manchester. To have a railroad route providing access to the Connecticut River would have meant prosperity for the slate and grindstone quarries in Bolton Notch. The railroad, however, was unable to raise the money needed and the line was not built, at least at that time.

Meanwhile, back in Vernon, in February, 1856, a group of Rockville businessmen began planning the best route for a railroad to connect Rockville, which was already quite industrialized, to the Hartford, Providence & Fishkill Railroad at Vernon Depot. The four and a half mile Rockville Railroad was chartered in 1857, but a national depression prevented its construction until 1862. Once the line was completed, the Rockville Railroad went into operation in August 1863.

In the mean time, in 1873, the Boston, Hartford & Erie had been re-organized into the New York and New England Railroad. Continuing legal issues with creditors of the former Hartford, Providence & Fishkill Railroad delayed it from actually taking of control until 1878.

At its peak, it required eleven people to run the operations at Vernon Depot. Three men operated the signal tower, three in the cabin, three to run the passenger station, a lamp lighter and a man to operate the pump house. Also employed was a section gang and a track walker.

In 1893, 14 passenger trains passed through Vernon each day. All of them stopped at Vernon Depot and were met with a connecting train to Rockville. Freight traffic was substantial. In 1907, the tracks from Burnside in East Hartford to Vernon Depot, Vernon Depot to Rockville, and the Melrose branch to East Windsor, were electrified, and trolleys shared the lines until the 1920's.

The advent of the automobile and motor trucks, along with the improvements in the national and local roads system, undermined the domination that all railroads had on the transportation industry. Railroads began to lose business to other modes of transportation. Trucks had the advantage of operating on publicly maintained roads. Railroads, on the other hand, were private rights-of-way and their extensive maintenance cost was part of their overall operating expense. The New Haven Railroad had spent alot of money to eliminate its competing railroads, literally buying some lines for the sole purpose of closing them. All of this strained the New Haven Railroad financially, and the railroad cut back on service. The New Haven Railroad closed the Vernon Depot station on December 31, 1930 leaving just a caretaker, who looked after the arrival of two mail trains per day. Things would never get better.

Passenger trains continued to pass through Vernon as part of the Boston to New York route. The Boston to Willimantic leg of the route was over the former Boston & New York Air Line . Two back to back Hurricanes struck Connecticut in August, 1955. Hurricanes Connie and Diane, striking only five days apart, led to the the infamous Flood of 1955, and caused massive damage all over. Among the damage state-wide to the railroad infrastructure, the Quinebaug River flooded it banks and destroyed the bridge over that river that carried the Air Line into Putnam, forever severing the Boston to New York route. The bridge was never rebuilt and regular passenger trains through Vernon came to an end.

The struggling New Haven Railroad went bankrupt in 1962, and was absorbed into the Penn Central Railroad on January 1, 1969. The Penn Central Railroad, already on slippery ground, filed for bankruptcy on June 21, 1970 and quickly began abandonment of track that was not profitable. The last freight train rumbled through Vernon on September 29, 1970. The portion of the line between Manchester and Columbia was formally abandoned. The track remained in place until about 1975, at which time the rails were torn up for scrap.

Today, the old railroad bed in Vernon is a very popular rail-trail. The right-of-way is owned by the State of Connecticut, and is land-banked as a potential future railroad route. The right-of-way could be leased to a railroad wishing to re-open the route. In the mean time, the public can enjoy it as a linear park. The state has kept most rail routes abandoned since the 1970's intact, and that is in everybody's best interest. Urban sprawl and environmental issues are making it difficult to add capacity to our existing highway system. Route 6 has been on the drawing board for decades. Since there would only be about twenty miles of track to re-lay to reconnect the active track in Manchester to the active track in Willimantic, this line could one day be the answer to the freight capacity problems on the Northeast Corridor. In the mean time, it serves us well as a rail-trail.


Mileposts from Providence to Waterbury


Mileposts on the Rockville branch


Mills on the Tankerhoosen River

There is local interest to create an interpretive outdoor museum at the site of the Vernon Depot Railroad Yard. An article was recently published in Horizons Magazine about the project. Click Here to read the online version of the article.